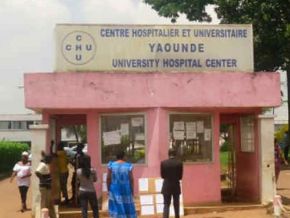 According to some sources, a walkout was scheduled to take place in this hospital on 13 February 2017.

A piece of news went around undercover on 10 February concerning a strike at the Centre Hospitalier et Universitaire (CHU) in Yaoundé which should have started on 13 February 2017. By gathering information from various sources, it appears that a strike had indeed been in the work in this health institute for several months. And that the delegates of the personnel submitted a walkout notice to the management of the CHU.

Contacted, the management explained that a meeting was held at the Ministry of Labour on 10 February 2017, during which the problems introduced were “meticulously” analysed.

The Ministries of Finance and Public Health were called upon for the special subsidy to pay the salary arrears and update the quarterly subsidy used to the salaries of the CHU personnel. “On this point and following the instant procedure started by the Minister of Public Health [André Mama Fouda], the Minister of Finance [Alamine Ousmane Mey] took the commitment of effectively making said subsidy available from Monday 13 February”, indicated the management of the CHU.

At the end of the meeting on 10 February 2017, it was also decided that the cancellation of the walkout planned for Monday 13 February and the normal continuation of public hospital services. The CHU authorities took the commitment of continuing the social dialogue to analyse the preoccupations submitted by the personnel delegates and come up with long-term solutions in the short, middle and long term.

The personnel revealed that they are demanding salary arrears dating back to June 2016. Including unpaid bonuses which, as at end 2016, amounted to about thirty million FCfa.