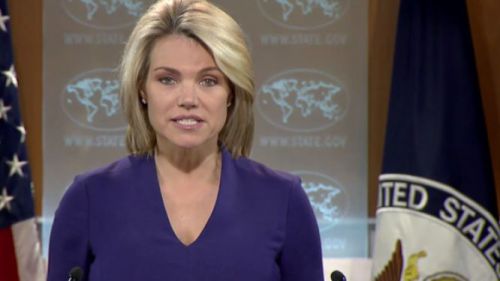 Did the US say that Cameroon does not respect the right of Anglophone prisoners?

Instead, the department spokesperson invited the authorities to respect the said prisoners’ rights.

There are many fanciful interpretations of Heather Nauert’s statement on February 5, 2018.

Many people claim that the Department Spokesperson “accused Cameroon’s authorities of disrespect of Anglophone prisoners’ rights”.

However, unlike what the rumors claim, he said that the United States condemn the ongoing violence in Cameroon’s Anglophone region and also emphasized the United States condemnation of the murder of two Cameroonian gendarmes in Mbingo, in the Northwest, a soldier outside of Bamenda and the murder on February 1of an electoral official of Elections Cameroon (ELECAM) in Bangem, and the reported deaths of four civilians in Bamenda and Belo on February 2 and 3”.

“We also call on the Government of Cameroon to respect the human rights and also ensure measures are put in place for the 47 Cameroonians forcibly returned from Nigerian custody to the Cameroonian authorities on January 26, and many of whom had reportedly submitted asylum claims in Nigeria”, Heather Nauert said.

It is obvious from the statement that Yaounde was not accused of any wrongdoing.