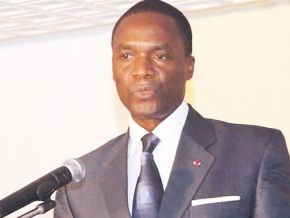 Yes, Cameroonian soldiers committed a blunder in the Southwest on May 12, 2018

For days now, a video of the violent scene is being shared on social media.

In a video being shared on social media, some soldiers are seen abusing a man sitting in a small puddle of water with his hands tied at his back. At the background, there is a map which actually resembles that of Cameroon’s so social media users claimed that the scene took place in Cameroon and, they are right.

Joseph Beti Assomo (photo), the defense minister confirmed it in a statement on May 15, 2018. He said that on May 12, 2018, during the fight against terrorism in the Northwest and Southwest, the elements of national defense forces were trying to arrest a man named Tsobbonyi Alphone Tatia alias Title Man, alias Général but he opposed with a fierce resistance. This video was shot during his arrest. Obviously, the soldiers in view of his resistance forgot everything about legal technics.

The defense minister further indicated that an investigation has been initiated to identify and punish the culprits of these actions that violate human rights.