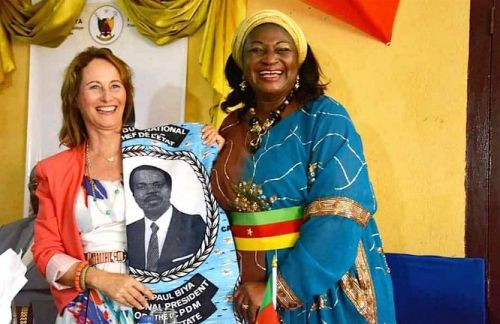 Yes, this image of Ségolène Royal holding a cloth with the effigy of RDPC is real!

It is said that this picture is not an edited one and that the former French minister is really holding the candidate Paul Biya’s communication medium. True?

Some people thought it was an edited picture but No! In this picture, the 2007 French presidential election candidate holds the well known RDPC’s cloth on her shoulder. This picture made the rounds on internet on July 13, 2018, when the official Paul Biya’s candidature for the presidential election of October 7, 2018, was announced. It is obvious that the loincloth is one of the presents offered to Ségolène Royal, during her visit in Bangangté, by Célestine Ketcha Courtès, mayor of this commune of the West.

The former minister of environment, energy, and sea stayed in the town from July 12 to July 13, 2018, in the framework of the second meeting of the steering committee of the project Femmes et énergie durable (women and sustainable energy). As the ambassador of Alliance Solaire (an important organization which advocates for solar energy use), she was invited by the association of Cameroonian women mayors.

For some people, by taking a picture holding RDPC’s communication medium, she is voicing France’s support for the candidate Paul Biya since she holds an official position in the administration of Emmanuel Macron, the French president.

Indeed, since July 28, 2017, she has been the ambassador in charge of the international negotiations for the arctic pole and Antarctica.