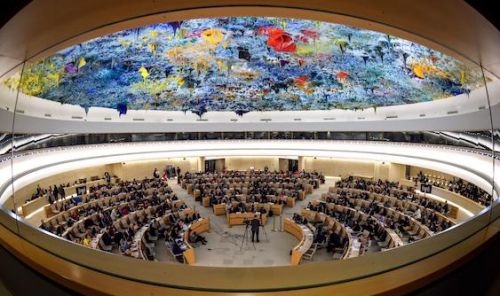 No, the UN has not ranked Cameroon as one of the top human rights abusers

A social media post claims that the country is the second human rights abuser in the world according to a UN index. Is it true?

According to a post shared on social media, the UN has ranked Cameroon as the second country in the world in which human rights are violated the most. “Breaking: Results of today’s election of top human rights abusers to the human rights council and % of votes they won: Cameroon 91%, Eritrea  83 %, Somalia 88%, Bahrain 85%, Bangladesh 92%, Philippines 85%,” the post reads.

The UN never published such ranking. The post was published on Twitter, on October 12, 2018, by the United Nations Watch (UN Watch), a non-governmental organization created in 1993 to ensure that the UN respects its charter and that human rights are available to everyone. It is thus not a UN institution as some people believe.

“United Nations Watch participates actively at the UN as an accredited NGO in Special Consultative Status to the UN Economic and Social Council (ECOSOC) and as an Associate NGO to the UN Department of Public Information (DPI). It reports regularly to both,” the NGO wrote on its website.

The post was quoted by many media last year. Even a Cameroonian journalist and activist shared it on the Facebook page. After cross-checks, it appears that the UN Watch’s post is erroneous.

A Google search shows that Cameroon is among the 18 countries selected for the UN’s human rights council. A statement was even published in French, on October 12, 2018, informing that Cameroon was elected with 176 votes, Eritrea (160 votes), Somalia (170 votes), Bahreïn (165 votes), Bangladesh (178 votes) and the Philippines (165).