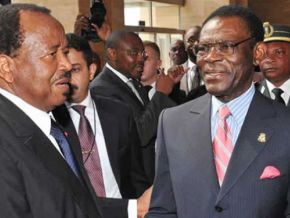 A note from the Embassy of Equatorial Guinea in Yaoundé is actually causing widespread public controversy. And for good reason, as the document signed on 3 March 2017 indicates, “the Presidency of the Republic of Equatorial Guinea, (...) gives the order to observe and execute the provisions of free movement to Community citizens holders of diplomatic, official or service passports, or in possession of a Mission Order issued by a competent authority, resulting from the last summit of CEMAC Heads of State held in Djibloho in Equatorial Guinea, on 17 February 2017”.

For many Cameroonians, Equatorial Guinea is once again saying “niet” to Cameroon in the case of free movement within the Central African Economic and Monetary Community.

Indeed, it should be emphasised in this note from the Equatorial-Guinean diplomatic mission a sort of opening-closing. Because, Equatorial Guinea is only opening its borders to Cameroonians who hold diplomatic passports or similar documents not requiring a visa. Which is already a small step forward. But, it is not fully applying the CEMAC Heads of State decision of 17 February which indicated quite clearly : “the Conference has taken note of the commitment of his Excellencies Ali Bongo Ondimba and Obiang Nguema Mbasogo, respectively President of the Republic of Gabon and President of the Republic of Guinea Bissau, to apply full free movement to benefit all nationals in the CEMAC zone holding a secure identity document (identity card or biometric passport)”.

Even if one should recall that this is not the first time that the country of Obiang Nguema or that of Ali Bongo of Gabon make promises without any favourable impact concerning sub-regional integration. Because, in May 2015, in practically the same circumstances, this duo already signed a document with the same effect as that of last 17 February. The final communiqué at that time said : “The Conference has decided the immediate application of the Additional Act pertaining to the entire CEMAC territory. In this regard, CEMAC country nationals are authorised to move without a visa, within the community territories, holding either a biometric identity card, or a biometric passport, or a CEMAC approved biometric passport”.

In spite of this resolution, the borders of Gabon and Equatorial Guinea still remain partially closed to all the nationals of CEMAC (Cameroon, Chad, Central Africa, Congo) without visas.