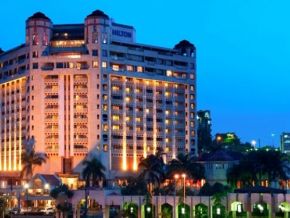 Yes, there is only one 5-star hotel in Cameroon

It is said that only the Hilton Hotel is rated 5-star in Cameroon. True?

Out of the about 500 graded hotels in Cameroon, only the Hilton Hotel (built in 1990) is 5-star, the highest grading for hotels apart from the palace which must have exceptional characteristics.

Indeed, according to an official report, in 2010, there were 460 graded hotels in the country. Namely, there was a 5-star, eight 4-star, seventy-four 3-star, ninety-eight 2-star and 279 one star hotels.

It should, however, be noted that the Grand Mall and Business Park, funded by Actis, is announced to be a 5-star hotel but, let’s remind that the attribution of stars to hotels is not an arbitrary exercise. Hotels are rated according to their environment, the building, the customer service and the service offered.

According to the decree of March 25, 1999, relative to tourism, hotel ratings are posted at the entrance on a small signboard.