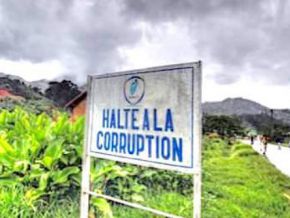 Does the Cameroonian phrase “Mange-mille” refer to corrupt policemen and gendarmes?

According to the legend, the “Mange-mille” (‘chop thousand’ or scroungers), different from the ‘mange-mil (red-billed quelea, a bird) illegally receive FCfa 1,000 from drivers violating the law.

A video posted in May 2017 brought back to the forefront the typically Cameroonian expression “Mange-mille”. The 3 minutes 26 seconds long video shows two gendarmes visibly in the middle of a roadside check. The two men in uniform receive bank notes from the drivers.

The drivers successively give some money to the two gendarmes who put the notes in a satchel on the motorbike or in a pocket in their uniform.

In return, the drivers get back what looks like the papers of their vehicles. As at 12 May, the video had already been viewed over 2,300 times. Which pushed Jean Baptiste Bokam, Defence State Secretary (SED) in charge of the gendarmerie out of his reserve.

In a radio message dated 9 May 2017, the SED wrote to the company commander of the second region of Douala to which the two “mange-mille” in the video belong. The subject of the message is: “Corruption under open skies”. “A video posted on social networks by unknown individuals is currently being shared on Facebook implicating personnel from the Bonabéri PRM in acts of corruption xx Kindly proceed with urgent verifications xx Moreover xx take disciplinary and legal actions against the concerned xx give account of the execution”, orders the SED.

While awaiting the results of the investigation requested by Jean Baptiste Bokam, one must note that “Mange-mille” (chop thousand) is different from mange-mil (red-billed quelea, a type of bird). In the expression “Mange-mille”, one must understand the idea of taking FCfa 1,000 notes.

It is therefore very common to see policemen or gendarme being wilfully bribed during traffic controls by offending drivers who discretely pass them FCfa 500 or 1,000 bank notes. And the breach in traffic regulation is “forgotten” by the “Mange-mille”.