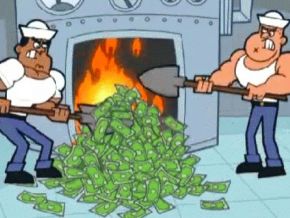 No, banknotes weren’t burnt by high officials in Yaoundé as rumors claim

Rumors have it that high officials have thrown bags of banknotes in waste dumping sites in Yaoundé. Is it true?

For some time now, a video showing a large quantity of banknotes shred into pieces at a waste dumping site is being shared online. The video shows people stunned to see such quantity of bank notes allegedly "burnt and shred" by Cameroonian high officials. Fact is, after our investigations, we discovered that the truth is far from what people believe.

According to credible and consistent sources, between June 13 and June 14, in Yaoundé, young people were looking for scrap metal as they usually do on the site when they found the bags.

During our investigations, we contacted the Yaoundé-based Bank of Central African States. Even though the authorized sources of this institution are unable to identify the dumping site, they confirmed that the shred banknotes could be those destroyed by the bank because they are old, overly used or have various problems.

"The black bags and the way the banknotes had been shred are similar to our way of discarding used or counterfeited notes,"  our source said. It adds that the institution didn’t want to add any information because the discarding process is not usually publicized.