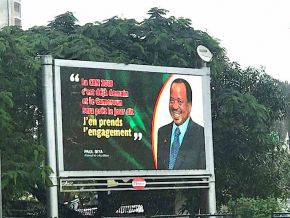 It is said that Paul Biya has commenced his campaign for the coming elections. True?

Messages displayed on various signboards suggest that the leader will run for the 2018 election. True?

Pictures of President Paul Biya on huge signboards situated around some roundabouts (Ecole publique Deido, Rond-point Sandaga, Bonanjo) in Douala are giving rising to many rumors. Indeed, the messages displayed on the panels suggest that the leader has commenced his electoral campaign ahead of the presidential polls next year. The message which is from the President himslef reads: “I pledge to insure that the 2019 African Cup of Nations takes place as planned”.

Some analysts deciphered behind the message another which is: "I will remain President in 2019". Most of these recall that Paul Biya’s actual term should end in 2018 (commenced in 2011). Despite their interpretation, it should be recalled that the message seen on panels was cut out from the President’s speech last August 10th, as he was receiving Cameroonians that won a medal during the recent 8th edition of the Jeux de la Francophonie, a sport event held in Abidjan, Ivory Coast, from July 21 to 31, 2017.

On that occasion, Paul Biya, spoke the words currently spurring a debate as it was said that the organization of the 2019 African Cup of Nations would be withdrawn from Cameroon. A threat made by the president of African Football Confederation (AFC), Ahmad Ahmad, during a press conference in Burkina Faso, as he feared Cameroon would not have the necessary infrastructures ready for the event. The message that brought up the debate regarding President Biya running for another term, in truth, intend to challenge all those who share Ahmad Ahmad’s opinion.