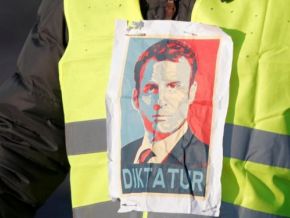 Yes, there were Cameroonians among the "gilets jaunes" in France

According to the French media Le Figaro, there were Cameroonians among the "gilets jaunes"  who protested on Saturday 15, 2018.True?

The French media Le Figaro posted a tweet extensively shared in Cameroonian forums. This tweet informed that there were Cameroonians among the "Gilets jaunes" (the large social revendication group launched in October 2018) in France. Another source reveals that there were about thirty among the 66,000 Gilets jaunes (official figures) who protested on December 15, 2018, at Place de la République.

On the sidelines of the French Gilets jaunes’ demands, Cameroonians were denouncing the electoral hold up in their country.  "My country is not well", was the sound from the loudspeaker according to Le Figaro.

Since the proclamation of the results of the October 7, 2018 elections in Cameroon, in favour of Paul Biya, protests have been organized in France by some Franco-Cameroonians. Gathered under the banner "Brigade anti sardinards" ("sardinards" being the name given to pro-Biya), a movement to sanction singers who performed during a concert-meeting organized by the ruling party RDPC in Yaoundé was organized in France and Belgium. Coco Argenté, Mani Bella and K-Tino were affected.