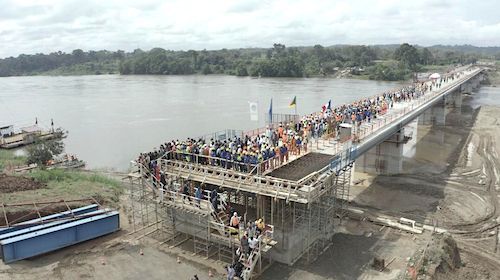 No, the bridge over the Sanaga River is not yet open to traffic

It is reported that the Minister of Public Works, Emmanuel Nganou Djoumessi, recently inaugurated this bridge. Is it true?

“The new bridge over the Sanaga River seen from the sky... Here are pictures of the 1st crossing of the bridge, on November 15th, by the Minister of Public Works and the director of @AFD_France#Cameroon.” This tweet from the Cameroonian Embassy, posted on November 25, created confusion in the minds of some people who believed that the new bridge on the Sanaga River was already open to traffic. But no.

In fact, as it can be seen on the photo, the bridge over the Sanaga River that will directly link Yaoundé to Ngaoundéré is still under construction. On November 15, Cameroon's Minister of Public Works, Emmanuel Nganou Djoumessi, presided over the ceremony to connect the two parts of this 400-metre-long steel-concrete structure.

The Ministry of Public Works estimates that the progress of the construction of the new bridge over the Sanaga River is 77%. The delivery of this structure, which is part of a package of 595 km of roads and 50 km of rural tracks to be rehabilitated, at a cost of €331 million (nearly XAF217 billion), is expected for 2020.

The expected impacts of this new bridge are: to exploit the potential of the agricultural basin of Mbam-Sanaga; contribute to the opening up and economic growth of the Central and Adamaoua regions, and to improve the continuity of the transport chain towards the North and Chad.