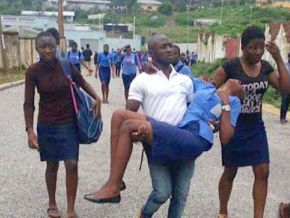 Did bees really attack students in an exam centre in Buea this Tuesday?

It is said that the insects stung several GCE candidates this morning?

On this morning of Tuesday 16 May, students taking part in the practical exams for the GCE Ordinary and Advanced Level (equivalent to the Junior high school exam and the Baccalaureate in the Francophone system) were indeed attacked by a bee swarm.

The scene took place at the Government High School of Buea Town, main high school in the administrative capital of the South-West region. According to a colleague journalist who lives there and other trustworthy sources, the victims of bee stings and ensuing stampede, were immediately taken to the Buea Town health centre, closest to the high school.

Georgina Enanga, Principal of the Government High School of Buea Town, revealed that 10 students were stung by bees and immediately transported to the health centre. Nine were released after receiving care and one remains in the hospital.

Many claim this is witchcraft. This other minor news item comes in addition to the arson started on Monday in another exam centre; this time in Bamenda. As a reminder, Buea and Bamenda have been the scenes of several crimes since the demands of a consortium of Anglophone citizens started in November 2016.