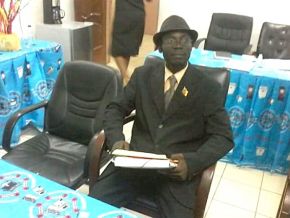 There is really a political party named Biya Party in Cameroon!

It is said that this political party has submitted its candidature for the presidential elections of October 2018. True?

Well, those who do not believe should do. There is really a political party named Biya Party in Cameroon even though it is not on the online list published by the ministry of territorial administration. BIYA PARTY was the ninth political party to submit its candidature (on July 17, 2018) for the coming presidential election.

And, don’t think that it belongs to Cameroon’s president Paul Biya. In fact, BIYA PARTY is the French Acronym of Bilingual Yaounde Political Party. The acronym BIYA (from Bilingual Yaounde) was used because it sounds more intereting than the full name. The party promoter is an enigmatic person named IHIMS ANE KUM from the anglophone region. According to his twitter account « @ane_ihims » (Well, yes he tweets very often), he is a civil servant.

In capital letters, it is indicated that he is a politician. His posts are rather ambitious and hostile to the current administration.

Now, Let’s wait and see if the electoral council will validate the party’s candidature. If validated, the party's promoter will be granted a budget for campaign. In addition, their security deposit (CFA30,000,000) will be refunded if they get at least 10% of the votes at the end of the election.