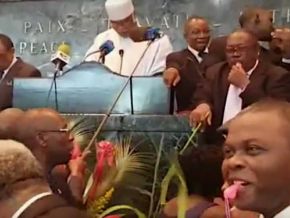 The national assembly’s rules of procedures provide for sanctions ranging from exclusion from the assembly to the suspension of parliamentarians allowances.

The troubles created by the opposition party’s deputies (prime minister jostled, songs and vuvuzelas, abuses, a deputy wounded…) during November 2017’s session have spurred debates in the country. Can the deputies who disrupt the national assembly’s order be sanctioned while they enjoy parliamentary immunity? Yes, they can.

If the deputy refuses to comply with the president’s order to leave the assembly, the session is suspended and the suspension is extended to 30 sitting days. The 30 sitting day exclusion is also applied when the deputy is sanctioned for the second time.

Article 99 provides that the national assembly's president can request, from the committee, a temporary suspension if a deputy assaults a colleague. If it is not requested by the president, another member can submit a written request to the committee.