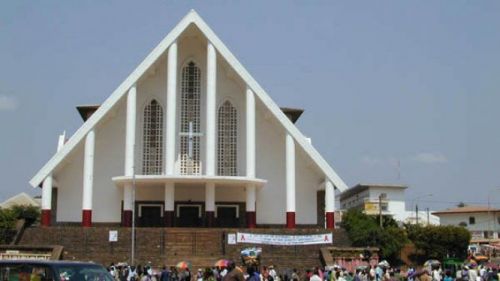 No, Notre-Dame-des-Victoires Cathedral in Yaoundé was not attacked during the morning mass of Dec 17, 2019

Many social media posts claim that armed men attacked the cathedral and took off with the alms. Is it true?

On Tuesday, December 17, 2019, many social media posts reported a “robbery”, in the morning,  at Notre-Dame-des-Victoires Cathedral in Yaoundé. According to the authors, the attack, which took place “at the end of the 6 am Mass,” was perpetrated by “armed men” who “took the entire alms with them after having kept all the celebrants at bay.”

The amount stolen is estimated at nearly XAF8 million, according to the posts. However, this information is not accurate. While it is true that unidentified individuals broke into Yaoundé Cathedral in the said morning, the attack took place outside the chapel and not during the morning mass (which begins at 6:15 am) as rumors suggest.

“On Tuesday, December 17, 2019, at around 7:20 a.m., two individuals stormed the office of the cashier of Yaoundé Cathedral, Mrs. Biloa Nicaise, who had just arrived to start her office. These individuals who pretended to be in search of small change attacked her, tied her up, ransacked her office and took her personal belongings and the contents of various boxes, the amount of which remains to be determined,” said Father Apollinaire Bertrand Ndzoumou Mendo, Acting Director of Communications of the Archdiocese of Yaoundé, in a statement issued shortly after this incident.

The latter assures that the cashier is “safe and sound” and that “no priest or other faithful person has been subjected to any kind of violence.” An investigation has been opened to shed light on this issue which occurred during Advent, a time when the Catholics are preparing to celebrate Christmas.