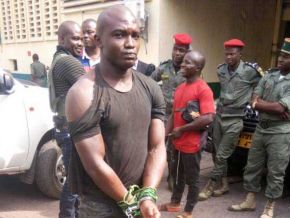 No, the military court does not judge only members of the armed forces!

Many people think that the military court only judges members of the armed forces. Are they right?

When a robber uses guns to commit crimes and is arrested, the military court is habilitated to judge the case. Mr. Mahop, a Cameroonian lawyer, explains that this court essentially sits for crimes committed with guns.

For the record, each region should normally have its military court. The one for the coastal region is in Bonanjo, Douala.