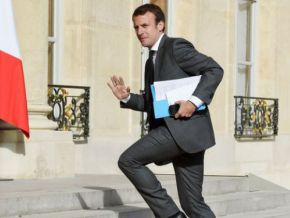 It is said that incorrect names were mentioned during the newscast, to present the new French government team. True?

This past Monday, during the 8:30 p.m. newscast om the national television channel CRTV, the presenter proudly announced Edouard Philippe's new government; based on the name of the new Prime Minister of France.

Adèle Mballa, who also happens to be a TV personality in  Cameroon, listed with confidence and back by analyses, the new team who will have the duty of supporting Emmanuel Macron (photo), the new French president,  during his five-year term. And many believed her; even though nothing had yet come from Matignon (in France) until Wednesday afternoon.

That is because, on Monday, a government has been created by social networks, and it went viral to the point of influencing the news report of the Cameroon Radio Television.

There has so far been no correction on this subject. Viewers only noted on Tuesday that instead of Adèle Mballa, it was Evelyne Essomba who presented the news report in French. We can imagine that she will be u charge of presenting Mr. Macron’s real team, on Wednesday.