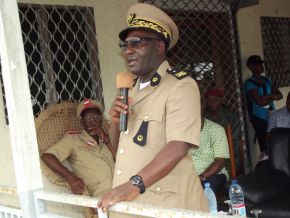 Based on a story on social networks, the most senior legal representative in Mbanga reckons that Mr. Tedjouteu, member of the main opposition party has no right to boycott the Unity National Day.

This looks like a surrealist story told on social networks since 14 May 2017. But it is true. “Bassileken Georges Magloire, Mbanga permanent Ministerial Representative, wants to force a SDF town Councillor to take part in the 20 May 2017 parade”, one can read on Facebook.

In an official correspondence of which we obtained a copy, the representative writes: “On 16 May 2017, you kindly sent to me for information a memo from the National President of the SDF addressed to his followers and in which he called for a non-participation in the activities for the celebration of the 45th National Unity Day. Following that, it is my pleasure to advise you that as the elected representative of the people, your presence at the public ceremonies is a republican obligation (ref. Decree n° 76-424 dated 16 September 1976 setting the rules for protocol in terms of public ceremonies)”.

The Ministerial Representative continues: “Your tendencies must not let you lose sight of your status as an elected representative of the people which compels you to respect republican requirements which your political commitments should in no manner shadow”.