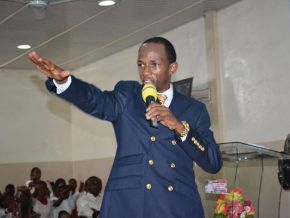 Social media declare that this pastor from a revivalist church in Yaoundé is apparently in the prison cell of the Defence State Secretary.

On 14 June 2017, social media announced that Pastor Dieunedort Kamdem was arrested for promoting, in Cameroon, the company Gesem Forex Trading, based in Côte d’Ivoire.

Stopblablacam got in the contact with the concerned. It appears that the pastor was not arrested.

Dieunedort Kamdem however confessed that he had legal troubles with the Ivorian evangelist, owner of Gesem Forex Group who extorted FCfa 10 million from him and FCfa 40 million from his congregation. Money which he took the commitment of refunding this money. “I was duped by an Ivorian pastor who is apparently in prison. He was promising to multiply the money of the congregation. But, following the advisory from the Financial Market Commission of the Douala Stock Exchange who had doubts on its credibility, the project simply stopped”, explains the pastor. Another proof that the one who is known as “God's General” is not in prison, Dieunedort Kamdem was invited on 16 June on the channel Vision 4 for the program “Au cœur des Mystères” (At the heart of mysteries). The central theme was “Satanic totems or cultural heritage”.

An investigation recently broadcast in May 2017 in the magazine “Afrique Investigation” on Canal+, showed Dieunedort Kamdem in front of his followers, during a conference on 14 February in Douala. “You invest one million for example and you let us know the name of your bank. And every month, we will give you FCfa 250,000 for a year...”, suggested the pastor. He then confessed having already invested FCfa 4 million, for which he received FCfa 1 million in monthly interest, from Gesem Forex Trading.

But according to the Financial Markets Commission, though promising 25% in return for every single investment on offer, Gesem Forex Trading “does not provide, to date, all the necessary guarantees of transparency and fiability to carry out such operations”. The financial watchdog therefore calls on the general public to verify, prior to any commitment, the necessary authorisations for such operations, or get in touch with its units.