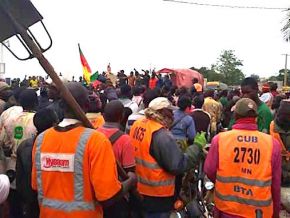 Yes: Electricity was restored in Bertoua after the residents demonstrated!

It is said that electricity was restored in the town because of the residents’ demonstrations. True?

Exasperated by the repeated power cuts, Bertoua residents took to the streets on Wednesday, July 18, 2018. “The roads were blocked at Nkolbikon and the headquarters of Eneo, the company in charge of energy distribution was stormed”, a resident narrated. Later on, the town’s thermal power plant was replenished thanks to a tank of fuel supplied by Tradex. Peace was restored thanks to the intervention of local authorities and negotiations with the demonstrators.

Indeed, from the evening of July 18, 2018 to the morning of July 19, there was no power cut while several weeks before, powercuts were untimely in this chief-town of the East.

“When electricity was restored, it would be for two hours max”, said a resident living not so far from the governor’s house. “In some neighborhoods, it would not be restored for days”, he added.

It is worth mentioning that the demonstration took place when several members of the government, such as the prime minister Philemon Yang, were in Bertoua for the 9th edition of  Festival national des Arts et de la Culture (started on July 16, 2018 and to be concluded on July 22, 2018).