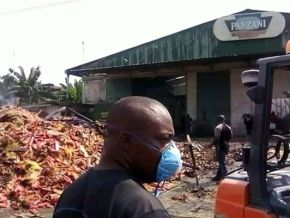 Yes, one of Panzani Cameroon’s warehouses was consumed by fire

It is said that this pasta production unit was consumed by fire on November 17, 2018, in Douala. Is it true?

On November 17, 2018, at around 1 AM, fire broke out in one of the warehouses of Panzani Cameroon in Douala burning thousands of pasta packs and office equipment. Firefighters, police, the coastal region’s governor and the prefect of Wouri came to the warehouse.

In its statement, Panzani Cameroon’s management informed that the fire broke out just hours before the official launch of its new pasta brand Pasta Gold.

Célestin Tawamba, CEO of Cadyst Consumer Group which owns Panzani Cameroon, assured that all the other production units and warehouses are "perfectly operational".

Panzani Cameroon is located in Bassa industrial zone, Douala and this fire outbreak which destroyed its warehouse reminds of the one which occurred on November 4, 2018 in one of the warehouses of its neighbor Biopharma, a cosmetic products manufacturer. An investigation is being conducted to determine the reason for these two incidents.