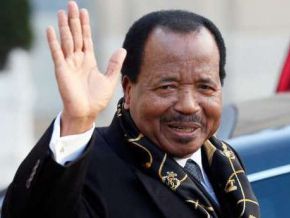 No, Paul Biya has not denounced a US attempt to destabilize Cameroon

On social media, an article attributed to the national daily claims that the head of state told the newspaper that Washington was trying to destabilize Cameroon, in particular by supporting English-speaking separatists. Really?

An article attributed to Cameroon's bilingual national daily and signed by a certain Endema Rodrick Anyangwe, who presents himself as “Cameroon Tribune's special reporter for the presidency” of the Republic, has been circulating on social media since November 27, 2019. In this article, shared notably via WhatsApp, the author writes that “the Cameroonian President, His Excellency Paul Biya, declared in Cameroon Tribune that the United States was trying to destabilize his country and that the efforts made by the opposition, supported by the United States to provide aid to Ambazonia, constituted a political ballet.”

The article also reports that the president has expressed his opposition to “possible American military intervention” in Cameroon while criticizing the American “invasion” of Iraq.

“Wrong, ” reacts Marie-Claire Nnana, the Director General of the Société de presse et d'éditions du Cameroun (Sopecam) and Director of Publication (Dp) of Cameroon Tribune. The latter “formally and categorically denies this information, which is pure falsehood and a manifest desire to poison public opinion,” in a press release published on Friday, November 29, 2019, in the columns of the publicly funded newspaper. A denial that can also be found in French and English on Cameroon Tribune's Facebook page.

This pseudo-article, she says, “is not found in any publication of Sopecam (publisher of Cameroon Tribune, editor's note) and its supposed author is in no way part of Sopecam's staff.” She, therefore, invites readers and Internet users to be more vigilant “at a time when liars are doubling their ingenuity to spread all kinds of false news.” This is not the first time that the national daily has been the victim of fake news. Last October, a fake article attributed to Cameroon Tribune announced the death, by poisoning, of Buea's mayor, Ekeme Patrick Esunge. Marie-Claire Nnana had also formally denied it.