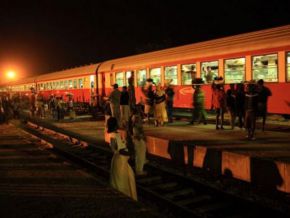 Railway traffic could be stopped in Cameroon due to works

According to some people, this is the consequence of the damage created by a railroad accident which occurred on 21 October 2016 in Eseka, resulting in the death and injury of many.

“There is a rumour that train traffic will stop due to some works. What is the actual truth, please?”. This question from a web user on an exchange platform set up by Camrail, subsidiary of the French group Bolloré Africa Logistics in charge of managing the Cameroonian railway, reveals a concern created by the 21 October 2016 train accident in Eseka, whose official report state the death of 79 persons and close to 600 injured.

For a section of the population, this accident damaged the railway and therefore, the traffic could be interrupted in Cameroon.

Camrail replies that “trains are running throughout the network. It is rather the number of sleeping cars which will change, due to technical constraints. In consequence, trains 191 and 192 linking the towns of Ngaoundéré and Yaoundé only offer 2nd class seats”.

The company adds: Camrail has started renovation works on the railway for example on the Batchenga-Ka'a stretch (175 km) which are already completed. Works which will be extended to the entire network with the support of our partners”. The company specified that interrupting the traffic was not an option.

With regards to the Douala-Yaoundé line, without the InterCity train, the Bolloré subsidiary says that semi-direct and omnibus trains will ensure the transport. It also announced that passengers will be informed in time of the return of InterCity.