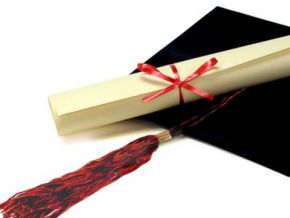 Did the African Union decide not to recognise Cameroonian degrees for the year 2016-2017?

The information was published on the website of the public media Cameroon Radio & Television (CRTV) on 16 February 2017.

The screenshot has been shared on social media since 16 February 2017 in the morning. On the image, the logo of the public media, Cameroon Radio & Television (CRTV). A dubious piece of news, to say the least, reading: “Good morning to the CRTV viewers. We would like to inform the general public that all the African nations gathered recently at the African Union Summit in Addis-Ababa have unanimously decided not to recognised Cameroonian degrees for the academic year 2016-2017. This was done in compliance with the UNESCO decision to declare a lost year after 40 days without classes”. The message concludes: “We deplore the negative consequences this decision could generate, but we firmly recommend to parents to register their wards in professional training centres to occupy them”.

This message which looks like a hoax was more insidious than it appears. Because, not only was it not broadcast by CRTV, but it does not come from any African Union Summit. Additionally, it is a publication transmitted in a period of tensed social situation in Cameroon in so-called “Anglophone” regions (South-West and North-West), where classes have been stopped for close to three months now.

Teachers on strike in this area of Cameroon who denounce the fact that the Anglo-Saxon education system is being turned into a French system (Francophonisation), have lost all control over a union movement. Indeed, these demands have now been turned into political demands (request for secession or federalism) by the “Cameroon Anglophone Civil Society Consortium” (CACSC).

CACSC, an organisation operating illegally and whose invalidity was notified by a decree from the Ministry of Local Government and Decentralisation on 19 January 2017, advocates for “city-wide shutdowns” and wishes for the academic year to be nullified in Cameroon. Which is not yet the case. Especially as, based on customs, it is the responsibility of the public authorities to formally void a school/academic year. And not the African Union or UNESCO.