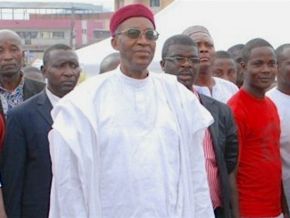 No, Adamou Mongwat is not UDC’s candidate for the 2018 presidential elections !

Some people claim that Adamou Mongwat is the member of Union démocratique du Cameroun (UDC) chosen as the party’s candidate for the presidential election of October 7, 2018.

The candidate on the eighth position of the candidates’ list published by Elecam (in charge of the organisation) for the 2018 presidential election is "Mongwat Adamou". He would have been chosen by the opposition party "Union démocratique du Cameroun" (UDC). But no, the candidate chosen by this party is Adamou Ndam Njoya, well-known in the political world in Cameroon.

A credible source at Elecam confirms that there is a mistake on the list published by this institution. Another source explains that this mistake was made during the secretary’s reporting.

Let’s remind that this election will be held on October 7, 2018. Apart from UDC, 27 other parties submitted their candidature. The constitutional court should review them and decide whether they comply with the regulation or not.