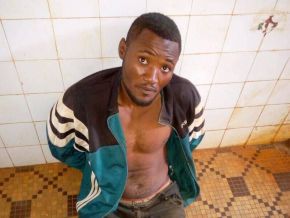 Yes, this is truly the picture of a soldier that deserted the BIR

Since last Tuesday, December 19, 2017, the picture of this young man has been circulating across various WhatsApp groups and it seems to have alerted the public opinion. Why? Well, it’s because this is none other than the caporal that deserted the Rapid Intervention Battalion (BIR). He was arrested on Tuesday, in the town of Tiko (in the South Western region).

Reliable sources said he was involved in dubious activities; linked to the secessionist crisis that is going on in the country’s English-speaking region.

These sources also indicated that the former caporal’s name is NEBA EMILE NGWA and that he was in service at KOMBO ABEDIMO 4, a community located in the Bakassi peninsula, in the South West.

The army or great mute (Grande Muette) as it is nicknamed in Cameroon is yet to have officially pronounced itself on the matter. Meanwhile, it is said that other deserters from the BIR are training rebels.