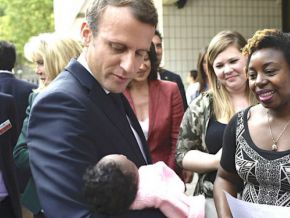 Is it true that a Cameroonian woman, in Paris, named her son Emmanuel Macron?

It is believed that a young Cameroonian couple named their new-born baby after the French leader.

Since last Thursday, some rumors have been circulating about a picture showing France’s President, Emmanuel Macron, holding the baby of a black woman. According to the post which is widely shared on Facebook, the woman is a Cameroonian who called her new-born child Emmanuel Macron, just like the leader.

It also states that the French Presidential couple visited the young couple. A statement which is not quite true. First, the pictures were not taken in a private space but in a public space, on August 9, as the leader and his wife visited sick children at the Robert Debré hospital in Paris.

During their visit, Brigitte and Emmanuel Macron took pictures with the kids and their parents. The other point debunking the rumors is that the baby seen on the picture that brought about the rumors is actually a girl and she is named Lydienne Macron Moukossi Ndope, according to a close friend of the family living in Cameroon. “Macron” is thus only the second name of the child. The child however is indeed born of parents of Cameroonian origin, the Ndope couple.

Our source added that the baby is the couple’s only child. Besides, in France, it is difficult to give a child another person’s surname. “If it does not have a father, the child is automatically named after his or her mother, and if the latter wants to name the baby after another person, this will be done through a complex procedure and that person must be from the mother’s family,” reads a Facebook post.