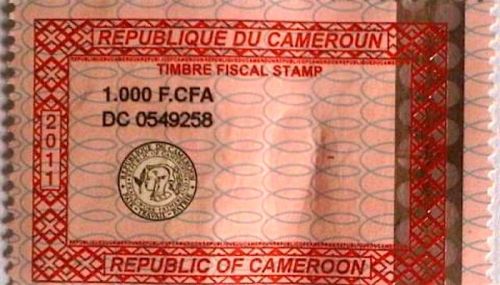 Yes, fake fiscal stamps are being sold again in Cameroon

On many candidates for civil service examination’s files, there are fake stamps with the value “CFA0000” written on them instead of the normal “CFA1,000”.

Well, we thought that the phenomenon of fake fiscal stamps was contained in Cameroon but no, despite the numerous sensitizations and cautions, it still persists. Indeed, a statement published on June 11, 2018, cautioned citizens to stay alert and buy their fiscal stamps at the official sales points and avoid entrusting their official documents to intermediaries.

He reminded that according to the current regulations, fiscal stamps are exclusively sold at tax centers, stamp revenues centers, general treasuries and levying centers.

He also explained that any official document stamped with fake fiscal stamp would automatically be rejected but the owners could be prosecuted.

Let’s remind that as it was the case for the finance department's statement in 2017, the current announcement is made because many candidates for civil service examinations have been complaining about their files being rejected because of fake fiscal stamps.

Indeed, some improvised stamp sellers and intermediaries posted around public administrations fix fake fiscal stamps, on which it is marked "CFA0000" instead of the usual CFA1,000,  on the candidates’ files.

The finance minister finally informed that the competent services of the tax general directorate could seize the stamps being sold to verify their authenticity.