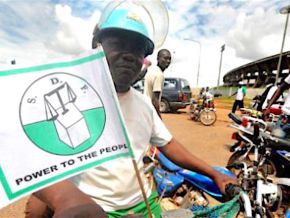 The Social Democratic Front (SDF) altered the initial purpose of the demonstration in violation of Cameroon’s law.

In the afternoon of Friday, October 20, social media have been buzzing all over Cameroon. Indeed, a tumultuous debate on the prohibition of the SDF demonstration scheduled for October 21, in Douala. On a side, those claiming the event was not forbidden, and on another those claiming the opposite. The truth however is that Jean-Marie Tchakui Noundie, sub-prefect of the Douala 1st district, has actually forbad the march.

In a statement released on October 19, 2017, the official notified that he issued on Oct. 12, 2017, a declaration receipt for a demonstration requesting permission for the temporary occupation of public roads, to Jean-Michel Nintcheu, regional chairman of SDF. The event was an occasion for the party to express its solidarity to the north-western and south-western populations of Cameroon. Therefore, the demonstration should have taken place as a meeting followed by a march, on a fixed and approved route.

“However, over the next days, judging from some releases in the columns of some medias and, some tendentious posts on social media as well as riotous flyers, the demonstration organizers actually planned to change the purpose of this demonstration and turn it into a meeting where they would aggressively call the populations to hatred and violence”, the sub-prefect wrote.

He also explained that he got some information according to which the march could lead to revolts and uprising, under the guise of denouncing some alleged “large-scale killings” in North-west and South-west Cameroon and so-called “mass deportations”.

What is more, other political parties, activists, even secessionists, declared their intentions to joins the demonstrators and seize this opportunity to provoke the populations and urging them to act in a way that in no manner respects the initial purpose of this march.

“Under these circumstances, given the bad faith shown by the organizers and the obvious alteration of the declared purpose, the demonstration scheduled for October, 21, 2017, could disturb public peace and, it is a serious threat to the security of people and assets”, Jean-Marie Tchakui Noundie concluded.