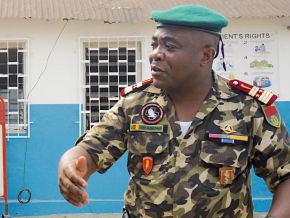 No, Colonel Abeng Mbozo’o, is not dead!

On January 22, 2018, the medical doctor has denied the rumors of his death, in the Southwest, during a TV program.

Contrary to what is said on social media, Colonel Abeng Mbozo’o is not dead. The head doctor of the military hospital of Région numéro 2 (Garrison) in Douala, is alive. On January 22, 2018, he belied the claims during a TV program and recounted what really happened during his recent mission in the Southwest region.

“On Thursday, January 18, 2018, I went in a community in the Southwest to take  Cameroon’s defense and security forces, wounded in clashes with radical activists during the crisis in the English speaking region, to hospital. In the wake, the military hospital’s ambulance has been riddled with bullets by some alleged secessionist and my death was soon announced”, he narrated. The Colonel also explained that he came out with some scratches.

Commenting the event, Abeng Mbozo’o said that shooting at ambulances is considered as crimes against humanity and, it is condemned by the law of war.  “Disregarding all the conventions on war and international human rights, the secessionist has riddled the ambulance with bullets, wounding several people. Thankfully, there was no loss of human life…” added Colonel Didier Badjeck, communication manager at the ministry of defense.