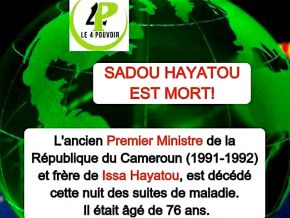 No, Sadou Hayatou hasn’t passed on

Some were already praising his life’s journey, updating his biography and posting post-humous tributes to announce Sadou Hayatou's death.

Though sick and old, the former minister still breathes. “My husband is well. You should have a minimum of decency,” his wife Senator Pierrette Hayatou shared very early this morning in a whatsApp group called “Les Amis du Septentrion”.

In addition, other family members denied this false rumor which has spread like wildfire.