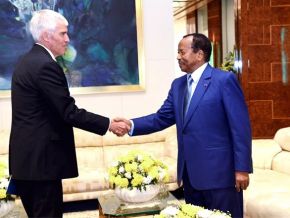 Peter Henry Balerin did not resign nor was he recalled!

It is said that following the ambassador’s statements, Donald Trump recalled him. Really?

On May 18, 2018, Peter Henry Balerin published a statement accusing Cameroon’s army of committing targeted murders in the Northwest and the Southwest. He even called on the president to think of the history he will leave behind in history books.

Following his statements, the minister of foreign affairs invited him to express the country’s views.

On May 23, 2018, when he traveled, rumors claimed that he resigned or he has been recalled. This is not the case.

According to authorized sources at the embassy in Yaoundé, he took his leave which was scheduled long ago. The source also informed that he sent a voice note to Cameroon’s ministry of foreign relations to communicate the name of the person who will ensure his interim till June 7, 2018, when he will be back.