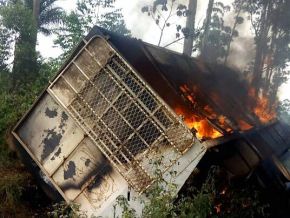 It is true: a brewery’s truck has been burned around Bamenda!

It is said that some unknown individuals burned the truck. True?

One of the trucks belonging to SABC has been intercepted and burned by six individuals on May 22, 2018, at Ngyenmbou, 10 km from Bamenda in the Northwest.

Concordant sources reveal that the truck loaded with crates was coming from Bamenda when the attackers armed with machetes and handmade guns attacked the driver and vandalized the truck. Once they committed their crime, they fled the scene before soldiers came.

Some experts think that this incident is related to the crisis in the Anglophone region. By the way, Bamenda is now the scene of operations called ghost towns during which almost all the businesses are closed for about a week.