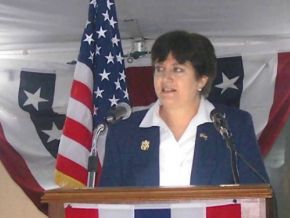 No, Stephanie Sanders Sullivan did not comment on Peter Henri Balerin’s discussion with the minister of foreign affairs!

For two days now, a statement attributed to the deputy secretary of states for Central Africa is being shared online.

For two days now, an image of Stephanie Sanders Sullivan, the deputy secretary of states for central Africa with these statements: “if the Cameroonian government thinks they can intimidate the US ambassador, it will not work. It is in their best interest to solve the problem” is being shared on WhatsApp and Facebook.

According to the indication on this image, she made the comment on May 23, 2018, after the audition of Peter Henri Balerin with the minister of foreign affairs on May 22.

Apart from this image, there is no indication of such statements. The representative’s recent public statement about Cameroon was made on May 20, 2018, during an event organized by Henri Etoundi Essomba and Peter Balerin at Omni Shoreham Hotel for the celebration of the National Unity.

In her speech, she rather commended Cameroon’s efforts in the fight against Boko Haram. “We also commend Cameroon for its membership in the Coalition to Defeat ISIS and its major contributions to the Multinational Joint Task Force (MNJTF) in the Lake Chad Basin Region, and to MINUSCA, the United Nations peacekeeping mission in the neighboring Central African Republic”, she said.

On the Anglophone crisis, she said this: “ We are concerned by current internal tensions. We sincerely hope that all elements of Cameroonian society can undertake genuine, inclusive dialogue to resolve these differences peacefully, so that Cameroon can realize its vision of becoming a middle income country by the year 2035”.

Invited on May 24, 2018 for the "Africa Continental Free Trade Area" her speech was about the United States’ support.