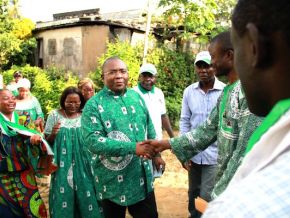 No, MP Jean Michel Nintcheu does not intend to join MRC

Is the MP really intending to change sides?

“I am a freedom fighter who does not leave a boat (Social Democratic Front) in trouble,” writes Jean Michel Nintcheu on his Facebook account. A post to silence rumors about any political party change or rally. “The patriotic solidarity I show towards the -Mouvement pour la Renaissance du Cameroun- MRC in its face-to-face confrontation with the dictatorial power of Yaoundé can in no way be compared to a rally,”  he added in his October 15 denial.

However, through his media and social network appearances, the SDF party MP for Wouri East district, generally agrees with the stances of Maurice Kamto, the MRC’s leader. “Basically, I believe that Professor Kamto is right to adopt this offensive stance,” he said the day after the MRC candidate self-proclaimed winning the October 7 presidential election.

Meanwhile, Jean Michel Nintcheu's rebellious stance at the end of the presidential election differs from that officially adopted by his party. And even more so that of Joshua Osih (deputy for Wouri-Centre district), flag bearer of the SDF for the polls. In addition, the SDF officially “dissociated” from Mr. Nintcheu in its initiative to organize a “public meeting followed by a peaceful march”  on 21 October in Douala. Moves that, among other things, suggest that this SDF member intends to change sides. This is not the case, for now, even though his future as an SDF MP is blurred.