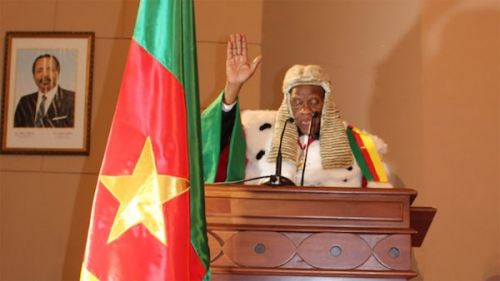 No, Cameroon is not building a house intuitu personae for Clément Atangana

Some people claim that it is to reward the president of the constitutional council that the government decided to offer him a XAF272.6 million house.

On October 23, 2018, a call for tender for the construction of a house for the president of Cameroon’s constitutional council was published in the national daily. Immediately after the publication, some people made it appear that the current president of this council Clément Atangana, was being rewarded for proclaiming the results of the October 7 presidential election won by Paul Biya. These rumors are untrue and can even be compared to manipulation.

In addition, the tender process is for the construction of a XAF272.6 million building launched by the Minister of State Property and Land Affairs Jacqueline Koung A Bessike. It is therefore not a private residence attributed intuitu personae to Clément Atangana as the funds used for this construction will be raised from the 2018 and 2019 budgets. It is a building that will be used for any president of the constitutional council in office.

Parties interested in that offer should submit their bids by November 28, 2018, at 3 PM. These bids will be opened the same day at 3 PM and the winner will be known at the end of the selection process. The winner will have 8 months to complete the building. So, it is probably in late 2019 that the president of the constitutional council will settle there.