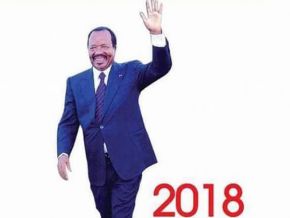 No, this is not Paul Biya’s official poster for the coming presidential campaign

Two images are attributed to the Cameroonian president’s team as their propaganda tools for the coming presidential campaign. Are those images real?

First, RDPC, the party of Cameroon’s president has not yet chosen a candidate for the coming presidential election. There are only people’s call and motions of support in favor of President Paul Biya.

Talking of the poster, even the tagline is not that attractive: “Paul Biya, le meilleur risqué” (Paul Biya, the best threat).

“This is probably the handiwork of an internaut. At least, it is everything except the work of a professional”, said  Jean Paul Tchomdou, communication expert.

According to some experts, the tagline used for this campaign could be similar to the one on the posters used in August 2017: “La Can 2019 c’est déjà demain et le Cameroun sera prêt le jour dit. J’en prends l’engagement”,  (AFCON 2019 is coming and Cameroon will be ready for it. I vouch for that).

As for the tagline  “Paul Biya, le meilleur risqué”, it is similar to the statements of Célestin Bedzigui, the former member of the opposition party who joined the ranks of the RDPC. He uttered the statement during a press conference when he declared his agreement with the president’s fifth term in office.