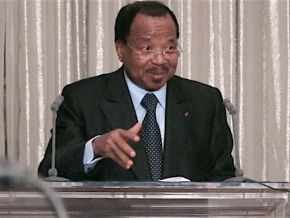 No, the Presidency didn't set a group of personalities to support Paul Biya's seventh term in office

It’s said that an official document  guaranties a paid membership to a restricted group of personalities close to Paul Biya. True?

A note marked “Very urgent” is attributed to the Secretary General at the Presidency of the Republic - SGPR - Ferdinand Ngoh Ngoh.

It is reportedly about “the creation, at the Presidency of the Republic, of a circle of high-ranking personalities whose purpose is to accompany President Paul Biya during his new term of office”.

A source close to the matter said this document is a “rough assembly” for manipulation purposes. The false document mentions that the membership fee to belong to this restricted circle amounts to “5,000,000 CFA francs for members of the government and 2,500,000 for other personalities”.

It also states that this amount must be paid before the date of the inauguration of the President of the Republic, while the D-day is not yet officially known. It should be noted that there is a sharp increase in fake news in this post-election period.