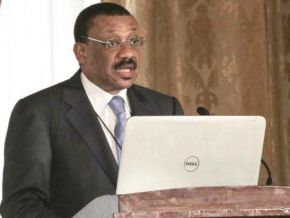 It is said here and there that Basile Atangana Kouna, Minister of Energy, recruited his “village brothers”

As part of a national solar power electrification project, the government member has apparently published an additional list of 30 names reminiscent of patronyms from his region of origin.

The publication by the Minister of Water and Energy (Minee), Basile Atangana Kouna, on 16 February 2017, of the additional list of candidates admitted to the technician and engineer training as part of the national solar power electrification project in Cameroon, provoked a negative response from the general public. Indeed, the names of the 30 applicants selected in the additional list for said project seem to indicate that all candidates are from the Centre-South region, region of origin of the government member. For some, the Minee did a “tribal” recruitment. He only employed his “village brothers”.

The fact is there was a first list of 132 candidates. And almost all the regions of the country were represented in said list and in each of the seven areas of training (fitter/installer, technician, engineer), if we take as sole criteria the origins of the names of the candidates.

Additionally, as Basile Atangana Kouna explained, “with regards to the additional list, it was published by taking account of the completion rate of the project in the Central and Southern regions where this rate is of 30%, the goal being to have technicians and engineers and other personnel immediately available, easily mobilizable and capable of quickly adapting to the areas of intervention, based on the proximity, cost and minimum intervention period requirements”.

The government member adds that the recruitment will be done on a continuous basis, as the project expands and become operational throughout the country and will take into account the specificity in terms of language, culture and customs of each region. “This is how one must understand the spirit of the project before drawing hasty conclusions”, says the Minee. In other words: the applicants are selected on a regional basis.