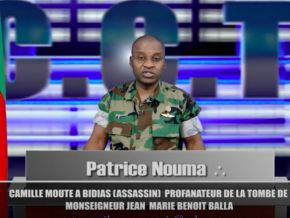 It is said that the FNE's director, in a video, defended himself against accusations claiming he murdered Bishop Benoit Bala

In the video, he replied to a charge brought against him by Patrice Nouma, a former official

It is true. Since this morning, there have been rumors relayed by social media and news websites about a video in which the director of FNE, Camille Moutè à Bidias defends himself against accusations claiming that he murdered Bishop Benoit Bala.

In the video which stopblablacam was able to get, the director of the national fund defended himself on the charges brought against him by Patrice Nouma, an ex-military, also former member of the Rassemblement Démocratique du Peuple Camerounais (RDCP), who is now living in the United States. In his video, FNE’s Head said among other things that he did not want to file a lawsuit against his accuser. He said he pardoned him and left the matter to “God's justice”.

The video of 27 minutes and 48 seconds that incriminated Camille Moutè à Bidias, was posted on September 23. In the latter, Patrice Nouma, which has been releasing since 2014 some incriminating and crazy videos accusing many officials, said the director of FNE killed Bishop Benoit Bala and desecrate his grave. He also accused the director of killing one of the mechanics of the bishop who surprised him while he was desecrating the grave.

In the message describing the incriminating video, Patrice Nouma who claimed that he had evidence of his claims and summoned the director of FNE to publicly confess if he does not want his children, exiled in the US, and his family to suffer humiliating public manifestations.