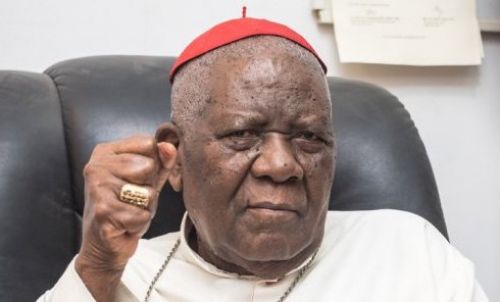 Yes, Cardinal Christian Tumi will no longer be mentioned during the Eucharistic prayers

Is it true that Douala's Archbishop Samuel Kleda decided to no more allow his predecessor to be cited in the Eucharistic prayers' intercession segment?

Many posts on social networks report that Cardinal Christian Tumi will no longer be cited in the Eucharistic prayer’s intercession segment. Supposedly, the decision was taken by Archbishop Samuel Kleda, Metropolitan Archbishop of Douala, who is also President of the National Episcopal Conference of Cameroon (Cenc). The information is true.

Indeed, in a decree released on January 22, Archbishop Kleda said Archbishop Emeritus Christian Tumi has enjoyed a "special privilege" since he renounced the pastoral charge of the Archdiocese of Douala in 2009. Tumi’s name, as a matter of fact, is cited after the Metropolitan Archbishop, in the section reserved for intercessions during the Eucharistic Prayer (Remember, Lord, your Church spread throughout the world: make it grow in your charity with the Pope [name of the Pope], our Bishop [name of the Bishop] and all those in charge of your people).

This "privilege," Archbishop Kleda decided to take away from his predecessor. "As of the date of signature of the present decree, I have decided to put an end to this particular practice," wrote the Prelate. "In reality, in the Eucharistic prayer, those who are mentioned by name are the Pope and the local bishop. We do not often mention those who are emeritus (the title given to a bishop who has resigned from his office for reasons of age, health or other reasons - Editor's note). However, the local bishop, who also heads the diocese, has the authority to let an emeritus be cited or not," a priest explained.