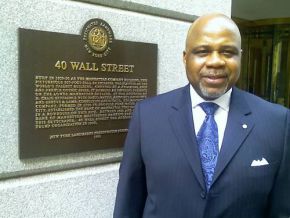 Some people say that opposition leader Célestin Bedzigui has been jailed

According to the rumour, the man presented as the Vice-President of UNDP was arrested on 25 February as he tried to participate in the 6th party convention in Yaoundé.

The news practically reached every corner of Yaoundé on 25 February: “Célestin Bedzigui has been arrested”. In reality, the man who introduces himself as Vice-President of the opposition party, Union Nationale pour la Démocratie et le Progrès (UNDP – National Union for Democracy and Progress), declared in a press communiqué dated 26 February 2017, just having been ushered out by security forces, as he was preparing to attend UNDP’s 6th Convention on 25 February in Yaoundé. He was therefore not thrown in jail.

“As Vice-President of UNDP, it was my duty to attend said Convention. The disagreements I have had for years with the President [of the party] Bello Bouba Maigari about political differences led me to start legal proceedings; several of which are pending to date. This is the reason for which to secure my presence at the Convention, I took the precaution of making an application before the Courts who issued me an order authorising my lawfully participation to the debates in all serenity”, writes Célestin Bedzigui.

The politician continues while indicating that, in a position of “flagrant violation” of the law, President Bello Bouba Maigari chose to have the police take action to prevent him from entering the location where the convention was held. “Even worse, to commit this infraction, he benefitted from active help from the Police forces who, according to Chief Superintendent Yossa, when I showed him the court order which he rather should have executed, acted with his troops on ‘order from the highest hierarchy”. People present thus witnessed an incredible scene of deployment of three superintendents including the Central Chief Superintendent in person supported by about thirty heavily armed officers”, relates Mr Bedzigui. For him, this incident is significant proof of the debasement of the republican morality of some Cameroonian politicians.

To understand why there is such animosity within this political party which has chosen for decades to partner up with the party in power, the Rassemblement Démocratique du Peuple Camerounais (RDPC – Cameroonian People Democratic Congress), we must recall that on 15 December 2016, Peter Kuma, National Communication Secretary for UNDP, signed a communiqué indicating that Célestin Bedzigui, who introduces himself as Vice-President of this political party, was banned ages ago. Which Mr Bedzigui contests.