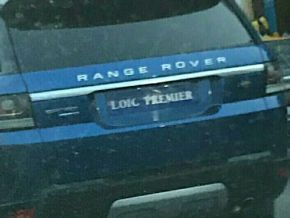 It is said that personalized number plates are legal in Cameroon. Really?

Having seen a personalized number plate in Douala, a Twitter user asked whether such types of plates are authorized by the law. "I would like to know if it is legal to have one’s name where the number plate should be,” the user wrote.

Interviewed about this, Ghislain Ayina, communications manager at the transports ministry, replied this : "No, this is not legal.”

Still, some people, artists, politicians and scammers violate that law. "If other people are doing it, why not me ?" they will ask. In addition, they are not worried about impromptu police checks.

Another unofficial source at the transports ministry informs of local habits. According to the source, users with personalized number plates must have a CEMAC plate inside. So, during checks, they show the authorised plates presenting the personalized plate as an advertising tool. "This is what I witnessed some people do," the source explained. It could be considered that people can do this with impunity but, in Cameroon, there are sanctions to such practices.

In November 2017, in a press release, the then transport minister Edgard Alain Mebe Ngo'o informed users of road fines and penalties. In the release, the fine for a lack of acceptable number plate, which was normally between XAF4,000 and XAF25,000, was set to XAF3,600. In addition, the car could be impounded.