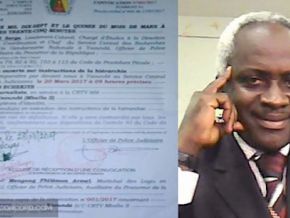 The rumour of  “hounding people from the Northwest and Southwest” lies in the summons of the CRTV journalist Fon Echekiye, by  investigators of the State Defence Secretariat (Secrétariat d’Etat à la Défense - SED).

A summons to the State Defence Secretariat (SED) at the gendarmerie of the English-speaking journalist Fon Echekiye, working at CRTV, quickly ignited social networks. To the point where, some claimed that it is because he is from the Anglophone part of the country that he received a summons for a hearing on the 28 March 2017. Exactly like the case of the former chairman of the bar Akere Muna interrogated at SED on 24 March 2017, in Yaoundé, on charges of : hostility against the homeland, advocating terrorism, secession, revolution, insurrection and threatening state security.

Only, the case of the journalist is totally different to that of Lawyer Akéré Muna, contrary to a certain point of view. According to reliable judicial sources, the summons announced online by the journalist Fon Echekiye, has nothing to do with investigations of troubles in the Southwest and Northwest regions. It is about a common law case where he is involved for having extorted FCfa 5 million from the former footballer Marcus Mokaké.

“Fon Echekiye released his summons without the slightest comment to sow doubts in the minds of Cameroonians. The rumour mongers quickly associated it to the Anglophone movements as he is from the area. It is a matter of fraud and this man has been invited to explain the facts. The law will decide what follows”, reveals a source who knows the case. The journalist is not expressing himself on the question because the case is pending before the court.