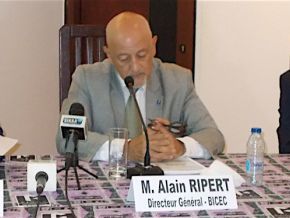 Alain Ripert, managing director of BICEC, did not resign

According to some media, the managing director supposedly resigned during a meeting of the executive board on November 4, 2017.

Indeed, Corinne Mpondo Mboko, communication manager at BICEC, published a press release which stated that Jean-Baptiste Bokam, chairman of the board of directors of BICEC and Alain Ripert strongly denied the allegations published by a certain press on November 22, 2017.

“There was no meeting of the executive board on November 4 and, no resignation letter has been sent. Alain Ripert remains the managing director”, the statement read. It also explained that the bank’s big projects (notably the financing of Cameroon’s economy and the bank’s headquarters and agencies renovation) remain Alain Ripert’s priorities.

Furthermore, BICEC explained that “commercial dynamism is increasingly enhanced especially, with the campaign of (BICEC’s) 55th anniversary. We are doing everything to consolidate BICEC’s position as the leading Cameroonian bank in terms of net banking products”.

As a matter of fact, BICEC is one of the largest banking networks in Cameroon with 39 agencies in the different regions and 750 collaborators.