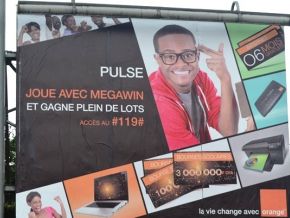 It is said that in the framework of Orange Cameroon’s Megawin, prize draws are conducted on Jambo TV and Canal 2. Really?

An internet user contacted StopBlaBlaCam today saying he was contacted by an employee of Orange Cameroon in the framework of MegaWin d’Orange Cameroun. According to the alleged employee, the user won XAF280,000 during the JAMBO TV show on Canal 2 International and will receive the prize on Orange Money account.

Questioned on the subject,  a source at Orange Cameroon indicates that this seems like a scam scheme. According to the source, there are prizes to be won in the framework of the MegaWin promo but, only subscribers that registered for the promo can win.

To register for this offer, subscribers have to dial the #119# or send "JEU" to the 9107 via SMS.  The page dedicated to this promo on the operator’s website indicates that the prizes to be won range from XAF100,000 to XAF3 million in scholarship, partial or complete IT kits and airtime.

The source also reveals that all of the operator’s call to its subscribers are made via corporate numbers like the 90009000 and cannot receive incoming calls. It adds that for six months now, the operator has not made a prize draw on any tv channel. It also gave us the operator’s Facebook and Twitter pages as well as the 950 and the 951, the respective customer care lines of Orange and Orange Money.

StopBlaBlaCam called the 951 to check the supposed employee’s number 659459730 transmitted by the user who contacted us. The customer care operator who picked our call confirmed that this was indeed a scam scheme.

The customer representative explained that 659459730 is not an Orange Money number. He further invited us to broadcast the 951 as the number to call to report anything and ignore any instructions given by those scammers.