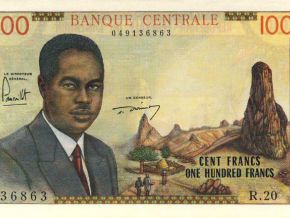 “Yesterday-yesterday” people, a common way of calling the youth here, can hardly believe it. But it is true that the current FCfa 100 coin was once a green bank note; more accurately before and just after Cameroon's independence in 1960. Long before the independence, there were 100 francs bank notes issued by the Bank of France for the “free French Africa”. Then, in 1957, the Issuing Institution for French Equatorial Africa and Cameroon took over with the issuance of the 100 francs note. A close-up of the face of Félix Eboué, Colonial Administrator for French Equatorial Africa, can be seen on the note.

Another important detail, this note was signed by the President of the Bank G.A. Gautier and his Managing Director Claude Panouillot. In 1961, after the independence, the Central Bank of Equatorial African States and Cameroon takes over the issuance of 100 francs notes. In 1962, the Cfa franc (the French African colonies' franc) becomes the official currency of Cameroon and the FCfa 100 note becomes legal tender. This time, it is issued by the Central Bank of the Federal Republic of Cameroon. This bank note has the portrait of then-President, Ahmadou Ahidjo.

It is signed by the Managing Director Claude Panouillot and a censor: Diouedi. At that time, the message to fans of forgery was bilingual. In a corner of the note, one could read in French and English that those who commit forgery would be punished in accordance with the law.

Today, there are no more FCfa 100 notes and it is the Bank of Central African States which operates. We can easily imagine that back in the days, one could buy far more than just bread with FCfa 100.