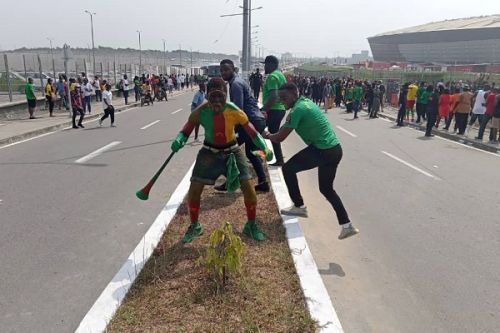 In the framework of the AFCON2021 being hosted in Cameroon since January 9, 2022, new infrastructures have sprung up in the city of Douala.

The hospitality sector experienced a real boom with new hotels being inaugurated. The most prestigious of them is Krystal Palace, inaugurated on December 17, 2021, by Prime Minister Joseph Dion Ngute.

Located at the center of the Aka business district, this luxurious hotel with nearly 250 rooms and suites is the first 5-star hotel in the city and the second hotel of this standing in the country after the Hilton in Yaoundé. It housed the delegation of the Confederation of African Football (CAF).

"It was not normal for Douala, the economic capital, to not have a Hilton-like hotel. Thanks to the AFCON, this is a deed done,” says Mouandjo, a taximan who has been operating in Douala for more than 25 years now.

The hospitality sector is not the only sector to benefit from the AFCON2021 ‘effect’. The urban road system also did. Some roads have been renovated and others built to facilitate urban mobility during and after the competition. Those works were carried out by the Douala Urban Community (CUD) and the Ministry of Housing and Urban Development (Minhdu).

Thanks to the works, it is now possible to drive from Marché des fleurs to the Douala 1er town hall without seeing any crack on the road surface, since all the potholes have been filled. The access roads built around the Japoma stadium and beyond have also created access to Douala 3rd.

"We invested a lot on roads to ensure smooth mobility for citizens. Apart from working on the main roads, we also prepared bypass routes, especially in Douala 3rd where a bypass has been built to reduce traffic congestion on the main axis that goes from Nyalla rails to Nyalla château [note: this axis is renowned for its traffic congestions]," said Roger Mbassa Ndine, mayor of the city of Douala.

"They maintained many roads, especially the main roads and tracks leading to the stadium. But in the neighborhoods, some roads are still in bad condition (...) Anyway, street lighting has been installed along those roads now. This was not the case before the AFCON," explained Marie Mbia, a temporary worker at a telecom company.

This measure is not enough, however. Some streets are still dark at nightfall but the mayor promises that problem will be solved since other modernization projects will be implemented after the competition.

The AFCON also boosted the sports infrastructures in the city. For both the population and local authorities, the 50,000-seat Japoma stadium is one of the main benefits the city gained from the tournament. "Japoma is the most beautiful stadium in Cameroon and one of the most beautiful in the world. Even Olembe (Ed.note: in Yaoundé) is not as beautiful as it is. It [Japoma] can even host World Cup matches. I am not the only one saying this. Cameroonians and even foreigners say this. Japoma is our pride in Douala," says Fabrice, a shoe seller and soccer fan Stop Bla Bla Cam met in Bonanjo.

"Japoma stadium is one of the exciting infrastructures launched in the framework of the AFCON2021: it is not the only one. There is also the Mbappe Leppe stadium, the Reunification stadium, and its annexes, the Bonamoussadi stadium. They were not built before that.  Having all those infrastructures nowadays means that Douala is no more lacking sports infrastructures,”  boasts Jean-Jacques Lengue Malapa, mayor of Douala 1.

The fact is Japoma stadium was built for the African Cup of Nations, while other sports facilities had just been renovated.

In the city, hospitals have also been transformed, especially those selected for the competition. The Laquintinie Hospital has received additional equipment and various services (hospitalization, obstetrics, intensive care, embalming) have been modernized. "Our intensive care unit is our greatest pride. We can perform 10 surgical operations at a time. We have our own oxygen production plant. We have 30 respirators and a 1.5 Tesla MRI machine. Personalities who come to us are never disappointed because the Head of State’s ambition is to limit medical evacuations," said Professor Noël Essomba, Director General of Laquintinie, during the celebration of the 90th anniversary of this health establishment last December. Currently, this hospital is a reference in terms of emergency reanimation in Central Africa.

Other hospitals whose technical capabilities have also been upgraded in Douala include the General Hospital and the Gynaeco-Obstetric and Paediatric Hospital. "These are multi-billion investments that have been made and our city is proud of them," concludes Roger Mbassa Dine.