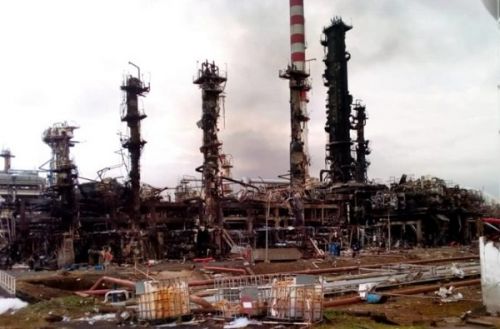 The reconstruction of Sonara will cost about XAF250 billion, the Minee says

On May 31, to mark the first anniversary of the fire that destroyed most of Cameroon’s National Refining Company Sonara (Société nationale de raffinage), the country's only refinery, the Minister of Water and Energy (Minee), Gaston Eloundou Essomba, provided some information on the project to rehabilitate the damaged infrastructure. The official was speaking on the national broadcasting radio CRTV.

"I can tell you that to date, a summary study has already shown us the various options we have for the rehabilitation of this institution. Moreover, the first estimates put the cost of the work at around XAF250 billion and several companies have already expressed interest in carrying out this work," the member of the government said.

According to the minister, this is a “major advantage” and "a major asset." He explained that thanks to the financial resources, the company is made attractive to its financial partners. He also revealed that by selecting marketers through a call for tenders, the country should save up to XAF150 billion a year in premium payments.

He further revealed that missions led by Sonara's General Manager, Jean Paul Njonou, and a Minee team have already visited the refinery sites rehabilitated or being rehabilitated after fire incidents similar to the one that occurred on May 31, 2019, at Sonara.

Mr. Eloundou Essomba did not indicate which companies are interested in rehabilitating Sonara. But it will be recalled that on the sidelines of the Russia-Africa Summit which ended on October 24, 2019, in Sochi, Cameroonian officials spoke with Russian oil groups. The company in charge of the reconstruction could be one of three Russian oil and gas majors already operating in Africa: Rosneft, Lukoil, and Gazprom. Moreover, on February 6, 2020, a delegation of officials from the Russian oil operator Lukoil was received in audience in Yaoundé, by Mr. Eloundou Essomba, to continue the talks begun in Sochi.

The fire of May 31, 2019, destroyed 4 of Sonara's 13 production units and partially damaged three. According to Jean Paul Njonou, the fire burnt more than 10,000 m3 (10 million litres) of crude oil. Once started, reconstruction works are expected to last at least 12 months.